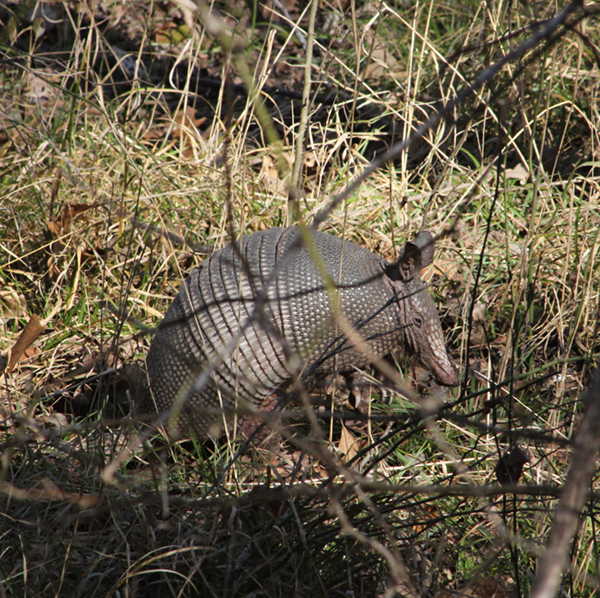 Dasypus novemcinctus also known as the Nine-banded Armadillo is an insect and small animal eater that came into the United States from Mexico about 130 years ago. Since that time, it has expanded its range through out the Gulf states and is pushing into Kansas, Missouri, and South Carolina.

They enjoy warm forested country with nearby water and soft diggable soils. They don’t survive in areas that undergo extreme cold for long periods. The family Dasypodidae has 9 genera and 20 species and it is the most successful group of the living Edentata which also contains the anteaters and sloths. The Edentates evolved in the Americas and once had a North American species of ground sloth, Megalonyx, that was as big as a cow. Edentata means no teeth, which is not true for the armadillo. They have some but not all of the teeth regularly found in mammals. Armadillo teeth are enamel free, peg-like, and are found only in the upper jaw of the cheek region. Armadillos lack incisor and canine teeth of other mammals because they don’t need them to eat insects and small soft-bodied animals that they encounter on their snuffling and digging trips through woodlands.

In the second picture, our friend is sitting on his haunches and you can see the large claws of his front feet as well as the sparsely hairy underbelly. These animals are unique among mammals because of their armored skin. They have a shield-like carapace over their shoulders and their hips and rump. In between there are 9 flexibly connected bands for which they are named (novemcintus means nine bands).

The last picture shows our armored friend plowing through the leaf-litter looking for insects and whatever else he might find. These little guys don’t see well and spend their time snuffling about. When startled, they will jump up and run from their tormentor. If cornered they will try to burrow into the soil so only their hard parts are exposed. If they get into their burrow, they can hold on so strongly they cannot be removed easily. Thus, their armor, speed and burrowing abilities defeat most predators.

Armadillos can become problematic when they invade yards and gardens and use their digging skills to prospect for grubs and worms. Some folks try to use live-traps to catch them for relocation. This is a hit or miss proposition with these guys. Some folks say just grab them by the tail and drop them into a large container to haul them somewhere for release. I wouldn’t do that without a thick pair of leather gloves on my hands. The sharp edges on the tail plates plus the tendency of these fellas to try and spin their body while you are holding the tail will lead to deep cuts on unprotected hands. I recommend leaving them alone and enjoying them for the curiosities they are.