In January of 2018, my wife and I were invited to a cook-out on a local ranch owned by the family of our friends, Walter, and Kay. It was a beautiful day to be outside in late January. Family members use this land for hunting and recreation and they feed corn and other grains to the wildlife that come onto the property. We saw mule deer, wild turkey, wild hogs and quail that day.

In the first image, a yearling spike male and a yearling female are by the homemade feeding trough where we were treated to several family groups coming in to graze over the course of the afternoon.

In the second image, an older female is near the trough but she is on full alert for trouble. Her huge ears are what earn this species the name of mule deer. Desert adapted animals can have enhanced ears to help them detect and avoid trouble on their range.

We enjoyed the wildlife drama as each group came to the feeding troughs and their cautious approaches. They seemed to tolerate each other most of the time and were more worried that people were nearby.

This image shows the first appearance of an adult male with what appeared to be a fair sized set of antlers.

I was able to follow this individual and his consort to a shady spot where they were resting and doing a little cud-chewing. If you you look closely at his antlers, you can see that they are not symmetrical. 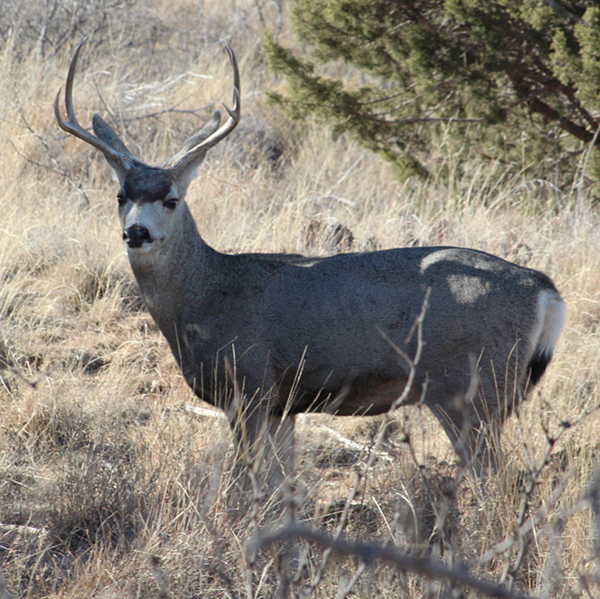 Here is another view from the front, notice that his right antler does not have as many tines as his left antler.

In talking with my friend Walter, I learned he was worried about this animal becoming the father of a whole generation of weird antlered deer since our region was going to be placed under a four year restriction on mule deer hunting to help improve the age and sex structure of the regional population which has been skewed due to hunting pressure. (See this article from the Caprock Courier Website)

At that point, I confess, I thought he had a reason to be concerned that he or some other hunter would be unable to eliminate this “aberrant” individual from the breeding population which would put more “weird antlered” deer into the local population.  However in preparing this post, I discovered that there were many nongenetic ways for mule deer, white-tailed deer, and elk to wind up sporting goofy antlers. In Antler Asymmetry by Elyse Henshaw (10-27-2014) on the Roger Tory Peterson Institute of Natural History website, she points out that injuries, infections, environmental stressors like food quantity and quality, pollutants, population density, and parasites as well as genetics can act to create asymmetry in the antlers of deer. On the Buck Manager website, the author discusses how leg or other bone fractures can interfere with the proper development of antlers. They also discuss how damage to the pedicle on the skull of the deer which produces the new antlers each year can produce malformed antlers during the rest of the buck’s life but can’t be passed on to offspring.

In the article on the Quality Deer Management Website by Gabe Karns, Mr. Karns addresses the tendency of hunter’s to attribute malformed antlers to genetic causes when there are many other non-genetic causes for antler malformation. His study of 71 specimens of asymmetrical white-tails tended to confirm that weird antlers came more from environment related injuries to the animal and not genetic mutations.

Check this one out in Colorado Outdoors Magazine which shows some radical elk antlers that are not due to genetic mutations! 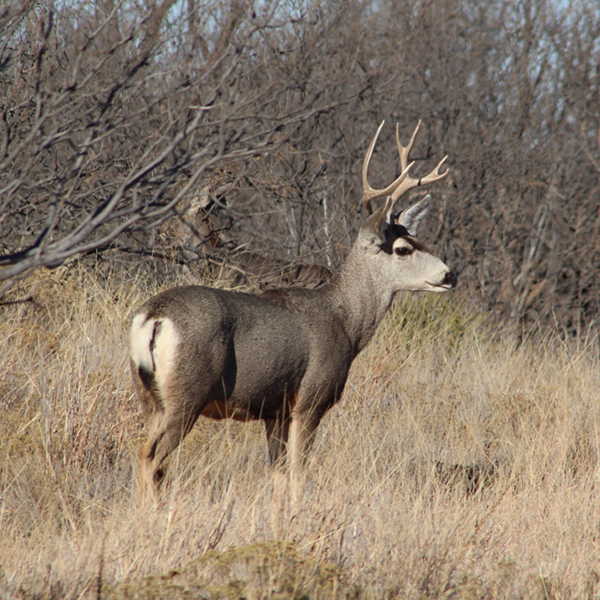 As a result of my inquiries into deer biology, I am happy that I can put to rest my concern about mutant mule deer taking over the region where I live. I suspect that my friend Walter and any other concerned hunter-conservationists will also be relieved by the issues raised in this post. Needless to say, food quality and availability, and pollutants are things landowners can help control to support the health of the deer populations and the other species that share the space.  Good stewardship of the land means we will have mule deer and all the attendant species now and in the future.