In the above image, a flock of Cedar Waxwing are awaiting their turn to visit a large nearby Cedar tree with lots of berries. Bombycilla cedrorum is native to North and Central America. This species and the Bohemian Waxwing are the two members of Waxwing family, Bombycillidae, that can be found in North America. 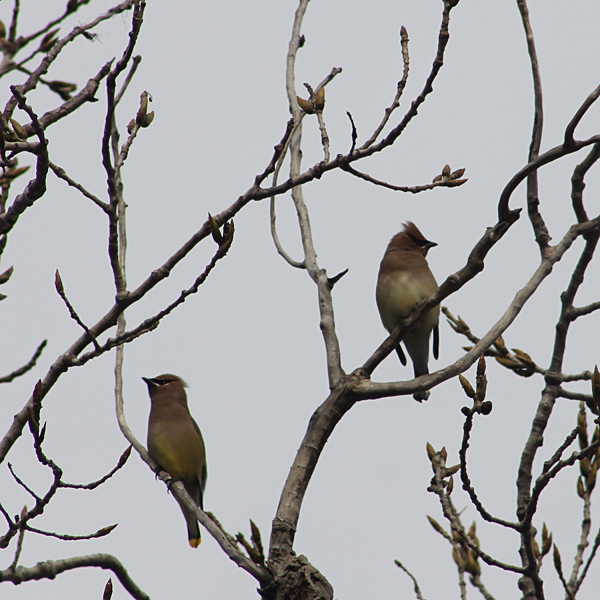 Cedar Waxwings are beautiful cinnamon colored birds with pale yellow bellies. They have a topknot that pops up and down, much like the Cardinals. Unlike many other birds, the males and females look similar to one another. They also tolerate each other’s company and are often seen in flocks feeding at trees and shrubs that produce berries they like to eat.

These pictures were taken in the early morning in the first week of March. This flock was most likely heading north to the woodlands of southern Canada for breeding season. The bird in the fore-ground shows the soft yellow belly and cinnamon breast plumage. You can also see the black eye-stripe and a partially raised topknot. The bird behind, while in poor focus, illustrates the red wax that these birds secrete at the tips of their wing feathers and this is the character their common name reflects.

Bombycilla translates as silk tail, while cedrorum means “of the Cedars”. Needless to say, these “Silk Tails of the Cedars” are interesting and beautiful birds and I was always glad when I could get close enough to photograph these busy little birds as they passed through Fort Worth during migration.

Because of the need to focus tightly on these birds, these images show only a portion of the huge flock that was enjoying their cedar berry breakfast that day.