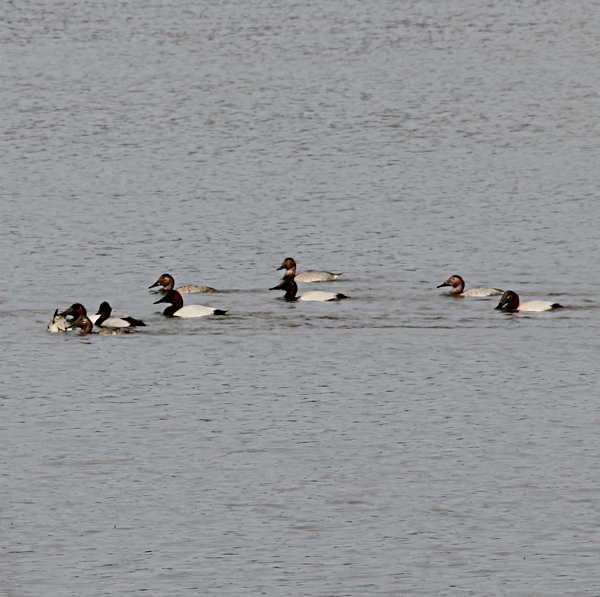 In the above image, a small flock of Canvasback ducks swim along a portion of the trinity river in the Fort Worth Nature Center and Refuge. Canvasbacks are members of the Diving Duck or Aythyini subfamily of the Anatidae. Their species name is Aythya valsineria. These ducks prefer open water habitats with ample stands of cattails and bullrushes. They feed upon pond weed and other submerged aquatic vegetation like the tubers of wild celery, arrowhead, and water lily. You can read more about this species at Wikipedia and ducks.org.

In the next image, Two males and two females are seen paddling along together. The beaks of all of these individuals have grey mud on them which makes their black beaks look different than normal. Note the male on the right has gray mud stuck to his forehead which also confounds identification. However, the white shoulders and backs of the males and their deep chestnut heads and red eyes makes these unmistakably Canvasback ducks. The females are similar in markings but more muted in head color and mottled on the shoulder and back.

In the third image, 3 males and two females are dabbling for food. Notice the female on the right who is filtering with her beak. Also, her head is covered in mud up past her eyes which shows the depth they will penetrate into the bottom mud for food.

The final image shows a flock of feeding Canvasbacks many with mud far up on their heads. You can see the cherry red eye of the male in the center of the photo.

Currently there are less than a million of these birds in North America. If you go to the U. S. Fish and Wildlife Service’s report, you will see that this species’s population has had its ups and downs since 1955 and is currently on the increase. The 2016 population of Canvasbacks is 26 % higher than the long term average size of its population. This is a good thing and is the result of a 100 year conservation effort by the United States and Canada under the Migratory Bird Treaty Act to monitor, manage, and promote the conservation of migratory waterfowl and their habitats. Without these activities, we wouldn’t have these beautiful creatures to enjoy. For more information, visit Flyways.us.